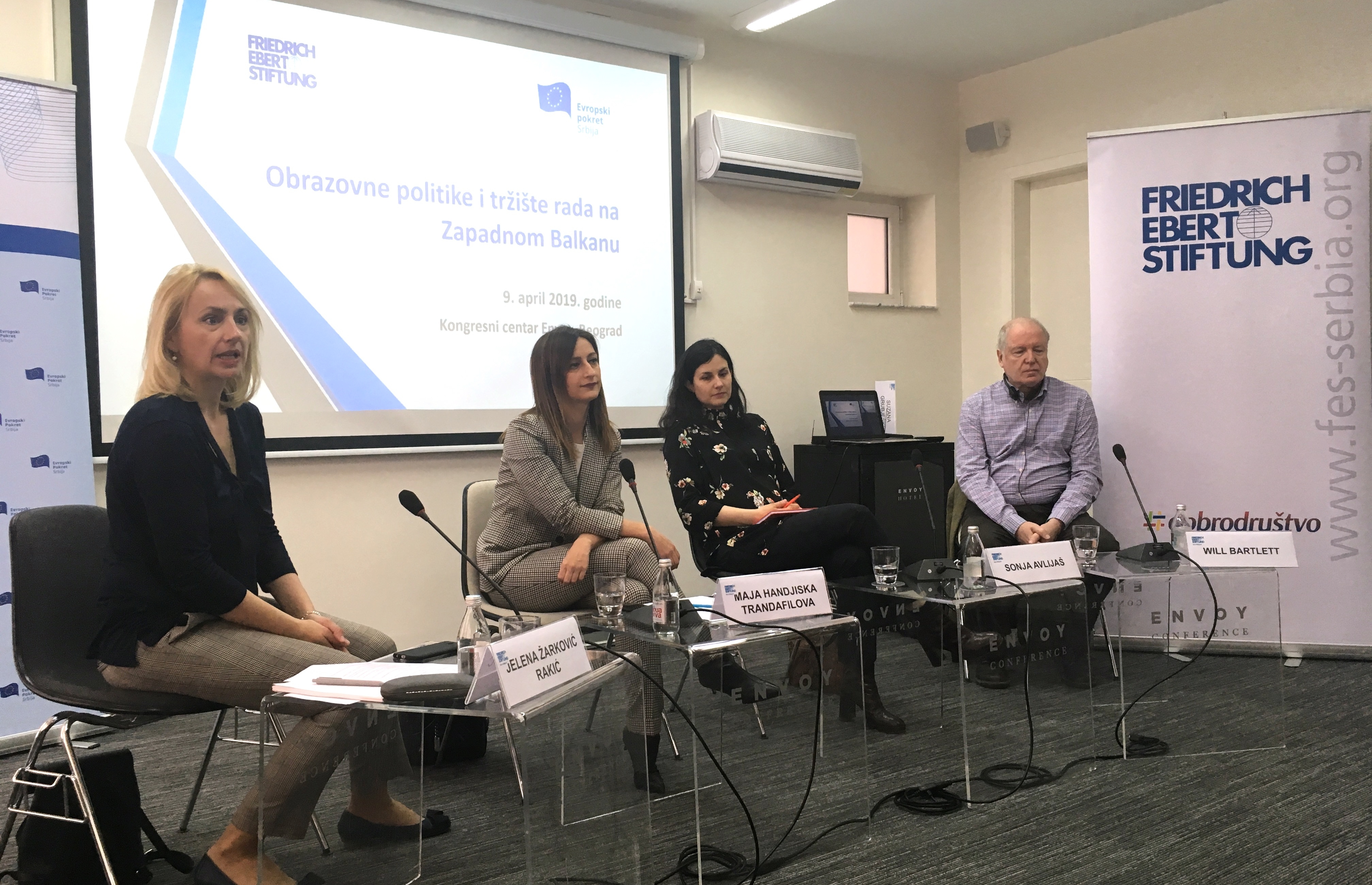 Education policy in the Western Balkans is marred by incompatibility of the education system with the labor market needs, as assessed at the conference “Education Policies and the Labor Market in the Western Balkans” organized by the Friedrich Ebert Foundation and the EMinS’ Social-Economic Forum. The quality of education is an important factor that influences the lack of synchronization of education and the labor market.

Brain-drain, migration of highly qualified workforce is still an all-encompassing difficulty for all states in the Western Balkans. This is why the panel participants pointed towards the reform of the schooling system and towards the need for state bodies to develop mechanisms to adjust to the economy of knowledge. However, there are notable steps forward in regional cooperation and very relevant for all six countries and their progress towards the European Union.

The European Movement in Serbia’s General Secretary Suzana Grubješić brought up the moving out of young and capable people as well as large numbers of the unemployed as two crucial trends in the Western Balkans. Opening the conference, she underlined the necessity of working on every aspect of this area.

Jelena Žarković Rakić, Associate Professor at the Economic Faculty of Belgrade and today’s moderator, noticed that, even though the last three years show better indicators on the job market, this is not enough. In her words, through deeper insight we can notice that these improvements are taking place in the domain of low-productivity employment found at the very bottom of the income scale.

Žarković concludes that “there is a need for increasing jobs in high-productivity sectors, with relation to higher standards of living.”

William Bartlett PhD, Senior Research Fellow at the London School of Economics and Political Science, presented research findings as part of his “Transitioning from School to the Workplace or University in the Western Balkans” presentation. He found that biggest unemployment figures for young people 25 to 29 years old in in Northern Macedonia (33.9%) and in Serbia (23.1%).

He considers the schooling system in the region as highly stratified, pointing out a trend of unemployment present on every level of education from elementary to the highest levels.

Sonja Avlijaš, Research Associate with the Laboratory of Interdisciplinary Evaluation of Public Policy Science Po in Paris, spoke on the welfare state and social investment modelled after Baltic states.

“Education is an integral part of social policy”, said Avlijaš, highlighting two matters relating to traditional narratives of social policy on the European welfare state. First, there is still pronounced worker protection from market exploitation, and second – the welfare state has not disappear but is being adjusted to the labour market that is changing in accordance with present paradigms of the knowledge economy.

This is why we need to invest more in knowledge as it is an important part of economic development. She states the example of Baltic states that, in adjusting to a new knowledge economy, managed to develop a sustainable welfare state model providing good results, bringing together economic and political aims.

She reminded attendees that “Estonia comes third in PISA testing results, behind Japan and Singapore, and our state investment in education has dropped to just 3 per cent of GDP.”

Maja Handjiska Trandafilova, President of the Regional Cooperation Council from Sarajevo spoke on regional perspectives of cooperation in the area of education policy, also pointing out two pillars of RCC work in these areas.

First, in working with the International Labour Organization (ILO) and with EU financial backing, the Council formed a platform for employment and social affairs. The platform serves for the cooperation of labour ministries, communal learning, and understanding good practices.

The second pillar is the betterment of employment in the public service domain. She expects that the signing of the Agreement on Mutual Recognition of Professional Qualifications in the Western Balkans will officially be part of the Berlin Process at the following EU-Western Balkans Summit in Poznań. The Agreement brings forth automatic diploma recognition in the region, enabling labour mobility and better communication of citizens.

Trandafilova concludes that “with the economic connection of regions, a central aim of the RCC, this will solidify integration in the Western Balkans”.