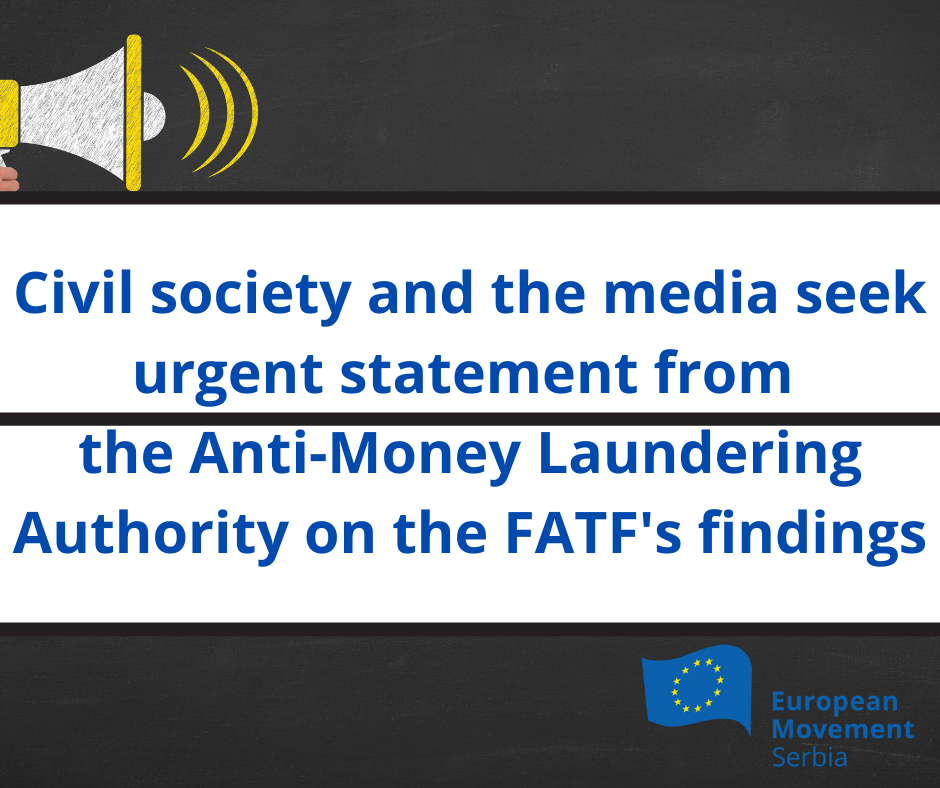 Speaking about this move of the Administration in the procedure against Serbia initiated by the United Nations Special Rapporteurs regarding the “List” case, the FATF assessed that there is a suspicion that the Republic of Serbia violated the recommendation of that body which determines the limits of the authority of the Administration for the Prevention of Money Laundering as a body of the financial intelligence service (Recommendation No. 29).

It should be reminded that the United Nations Special Rapporteurs concluded in a statement published on November 11, 2020 that the Government of Serbia abused the mechanism for combating money laundering and terrorist financing in order to intimidate civil society representatives and human rights defenders, limit their work and stifle criticism of the government when it sent a request to banks in Serbia to submit data on all accounts and money transactions for 57 organizations and individuals from the media and civil society listed on the so-called “List”. This body then initiated the procedure, which included requests for an official statement from the Republic of Serbia, but also the Working Group for Financial Action (FATF), an international body whose recommendations the Administration for the Prevention of Money Laundering referred to in its explanation, as well as Council of Europe Committee for the Evaluation of Measures to Combat Money Laundering and Terrorist Financing – MONEYVAL. We note that this case also found its place in the progress report of the countries covered by full monitoring, which was discussed at the last session of the Parliamentary Assembly of the Council of Europe, held on 25-28. January, as one of the most important points for assessing Serbia’s progress during 2020.

Responding to the Special Procedures ‘request for a statement, the FATF clearly dissociated itself from such actions by the Administration, stating that it shares the United Nations’ concern that Serbia has abused the Law on Prevention of Money Laundering and Terrorist Financing to put pressure on civil society and limit its work because of its critical orientation towards the authorities. In the response of this organization, it is further pointed out that such conduct of the Administration is in direct contradiction with FATF standards, and that the powers given to financial intelligence bodies in the fight against money laundering and terrorist financing do not include non-selective requests for information in order to conduct analysis, calling them “fishing expeditions”. Also, the FATF stated that in the preparation of strategic analyzes, financial-intelligence bodies, such as the Administration for the Prevention of Money Laundering, do not have the right to request data from their taxpayers, ie. commercial banks, and that it is contrary to their standards to collect data on specific organizations and individuals without reason. This indicates that the explanation of the Administration for the Prevention of Money Laundering, that it used Article 73 of the Law on Prevention of Money Laundering and Financing of Terrorism because it had no other way to collect data on donations to organizations from the List, is in direct conflict with international standards.

This explanation also indicates that the Administration is not ready for a true partnership with the civil sector in the fight against terrorism, because these data could have been obtained by asking organizations and offering to participate in the preparation of part of the analysis. Such examples of good practice in partnership in the implementation of FATF Recommendation No. 8 concerning the prevention of abuse of the non-profit sector for terrorist financing already exist in Europe.

This response of the FATF as the most significant international body in this field not only confirms our suspicion of the validity of the actions of the Serbian authorities in this case, but with a clear definition of the relevant international institutions in this regard a standard has been established that can be applied in all other cases of abuse of mechanisms to prevent the financing of terrorism for the purpose of putting pressure on civil society and the media in other countries.

Civil society organizations and the media from the “List” call on the Administration for the Prevention of Money Laundering to take concrete steps to repair the damage caused to organizations and individuals who are inappropriately targeted, in order to restore the trust necessary to continue cooperation in the fight against terrorism and extremism.

By premins| 2021-02-01T15:55:25+00:00 January 29th, 2021|Categories: EMinS Statements|Tags: Civil Society|Comments Off on Civil society and the media seek urgent statement from the Anti-Money Laundering Authority on the FATF’s findings