As part of the revival of the Berlin Process, with the full consent of actors from the region, a Forum of Civil Society and Think Tanks from the Western Balkans was held in Berlin on November 1st and 2nd. The president of EMinS, Jelica Minić attended the event. 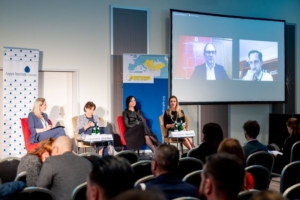 The event gathered around 110 representatives of the non-governmental sector from the WB region and EU member states, primarily Germany, as well as several representatives of the German administration and European institutions. In a very productive debate in eight closed thematic workshops, next, in nine public panels on current topics, and in those that were most in the center of attention – recommendations of civil society were formulated.

Representatives of civil society had the opportunity to present some of the key recommendations to the participants of the Berlin Process Summit, thus including these recommendations at the highest level, in the review of the EU enlargement process and in support of the necessary reforms in the Western Balkans.

Recommendations of the Forum:

The work of the Forum, in addition to the Federal Office for Foreign Affairs of Germany (German Foreign Office), was also organizationally supported by the Association for Southeast Europe, from Munich, and the Aspen Institute, from Berlin.