Home/EMinS News/Conference Revitalization of European values – Belgrade, May 8-10
Previous Next 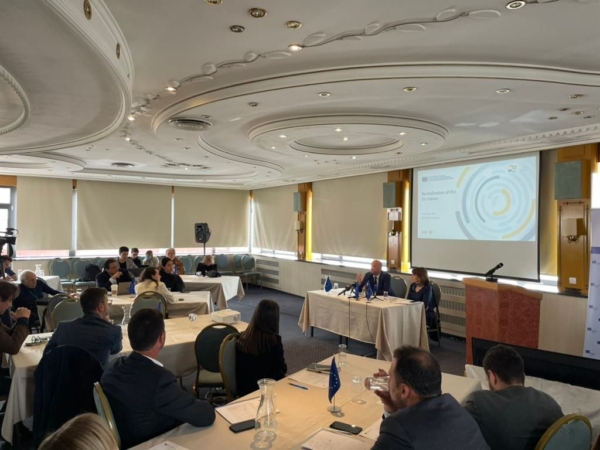 Representatives of 21 civil society organizations of the Western Balkans and Turkey at the three-day conference “Revitalization of EU Values” discussed how to improve the process of EU enlargement and how to more effectively communicate the values ​​promoted by the EU to the public. At the conference organized by the European Movement in Serbia, with the support of the European Technical Assistance for Civil Society Organizations (EU TACSO 3), three experts in the field of European integration and communications were guest lecturers/trainers, next a round table was held with representatives of all the countries of the region and Turkey, and the participants were addressed by Emanuel Saracin, Germany’s special envoy for the Western Balkans, and Paul Henri Presse, head of information, communication and media at the EU Delegation in Serbia.

The round table on “The future of the Western Balkans and Turkey: challenges and expectations” was opened by Suzana Bošković-Prodanović, Assistant Minister of Foreign Affairs for European Integration of the Republic of Serbia. She said that the EU integration process has many ups and downs, but that membership in the Union is of crucial importance for Serbia. Afterwards, activist and academic Selcuk Erez spoke about the impact of human rights violations on Turkey’s EU integration, on which occasion he cited the case of activist Osman Kavala, who was accused of causing riots in Gazi Park in Istanbul and sentenced to life imprisonment. Journalist Ben Andoni and researcher Stefan Ristovski of the European Institute of Politics then discussed the impossibility of obtaining a date for accession negotiations for North Macedonia and Albania, on the basis of which they concluded that this affects the decline of the credibility of the EU among the citizens of the region. The Executive Director of the Balkan Forum, Astrit Istefi, spoke about the process of visa liberalization for Kosovo, which, in his opinion, was extremely slowed down by the lack of dialogue between Belgrade and Pristina. The editor of “Buka” magazine Aleksandar Trifunović pointed out the lack of dialogue between the entities of Bosnia and Herzegovina, which leads to the fact that the country is still perceived as being on the verge of conflict in international circles. Milica Zindović, program assistant of the Center for Civil Education, spoke about the formation of a new minority government in Montenegro, which has a number of challenges ahead of it in order to speed up the process of European integration. Finally, in his presentation, EMINS vice-president Ivan Vujačić dealt with the impact of the Ukrainian crisis on the future of Serbia, which, in his opinion, no longer has the possibility of maintaining a neutral position but must choose a side.

The participants of the conference were also addressed by Emanuel Saracin, the special envoy of Germany for the Western Balkans. He said that his country advocates for the full membership of the countries of the Western Balkans in the European Union, rejecting the possibility of these countries being members of the “second order or in some kind of partnership with the Union”. Germany is committed to the Berlin process, said Saracin, but the only key to the success of Serbia’s European integration is solving the issue of dialogue between Belgrade and Pristina.

Richard Allen, EU TACSO 3 team leader who opened the conference, warned of Brexit, exemplifying that the benefits of the EU must be visible to all citizens, not just the elite, and that anti-EU narratives are not harmless, but in fact very dangerous and threaten not only the EU but European civilization as well.

Jelica Minic, president of the European Movement in Serbia, pointed to a long list of reasons why the EU should be our choice. “The EU replaces exclusion with inclusion, helps Europeans understand their shared values, encourages cooperation and efficiency, sets an example for the rest of the world, enables Europe to “speak louder” and encourages a rights-based approach to international affairs.”

The General Secretary of EMinS, Zvezdana Kovač, pointed out that we have to change the way in which we have viewed the EU until now, being “boring and bureaucratic” and as a community that is “not connected with its citizens”. She reminded that the EU is the closest partner of the Western Balkans and pointed out that the citizens of the region must be properly informed about this fact.