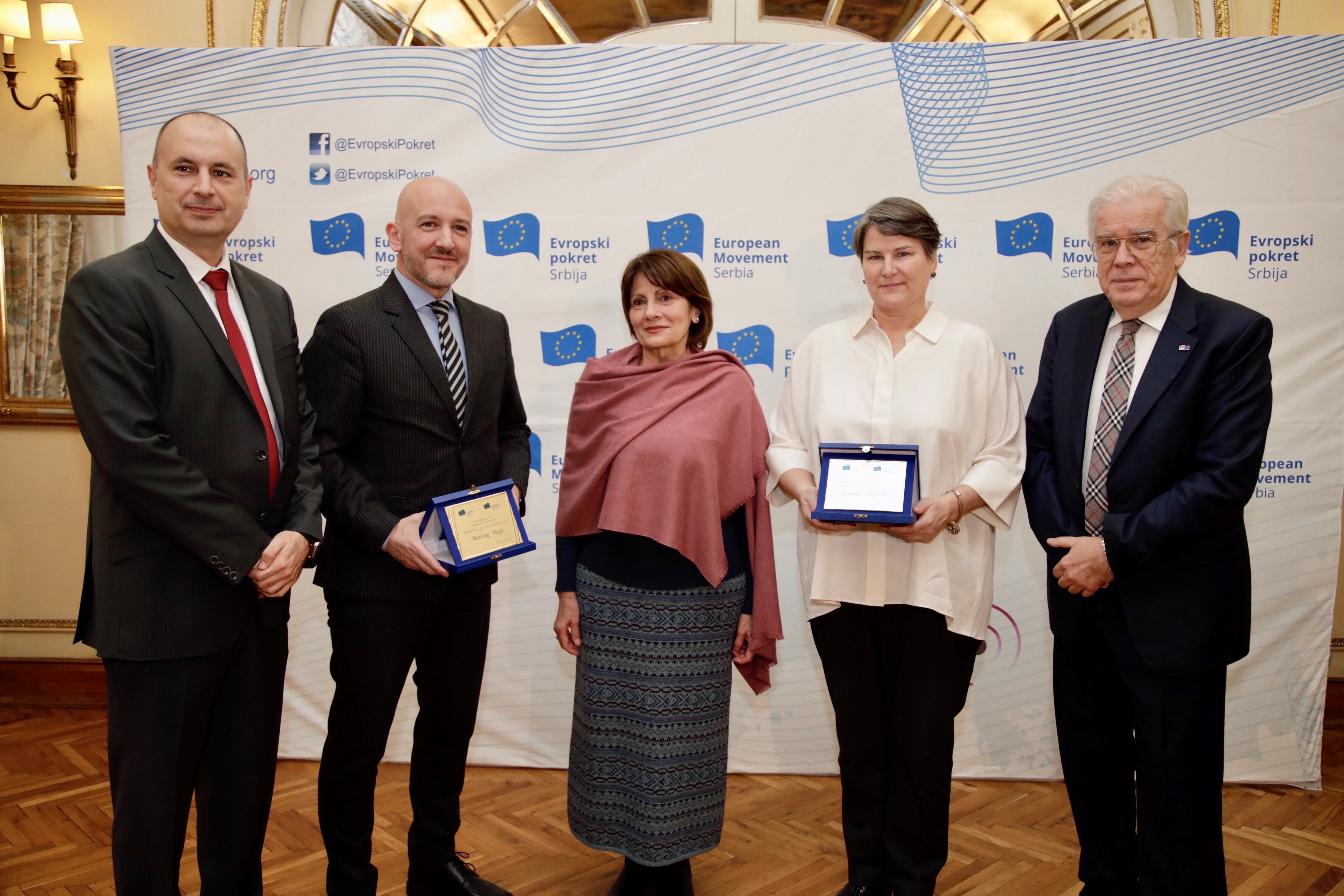 Contribution of the Year to Europe for 2019 awards have been awarded to the Rector of the University of Belgrade, Ms. Ivanka Popović and judge of the Belgrade Court of Appeal, Mr. Miodrag Majić at the ceremony held in Belgrade last week.

The award was established in 2002 by the European Movement in Serbia and the International European Movement and it is awarded annually for a speech, a book, a specific action or standpoint by an individual, organization or group of citizens which has significantly contributed to the European integration process and the promotion of European ideas and values ​​in our country.

President of the European Movement in Serbia, Mr. Mihailo Crnobrnja handed the plaque to Ms. Ivanka Popović and said that the Rector will be remembered in the history of the University of Belgrade for two statements of intent that she has wholly fulfilled, thus defending the seriously endangered autonomy, integrity and reputation of one of the most important public institutions in Serbia. After a long struggle and pressure from the authorities, the University did what was necessary for the students and professors, the professional and scientific public and citizens of Serbia to be able to once again be proud of one of the key players in social life, culture, knowledge acquisition and international standing.

“The European Movement in Serbia acknowledges Rector Ivanka Popović for the extraordinary role she has played in carrying out this difficult task, which has captured the attention of the general public and thanks her for her courage and consistency,” explained Crnobrnja.

Expressing her gratitude for the recognition, Popović stated that the University of Belgrade is taking serious steps to come into the position that society expects of it.

“These changes will not be quick and it is better to progress with small steps that we can fulfill, than to promise big ones that we cannot,” she said adding that the University of Belgrade will serve as a higher education institution of national importance and will help other universities to fulfill their role.

Judge Majić was presented the plaque by the Vice President of the European Movement in Serbia, Mr. Vladimir Međak, who explained that Majić had been a long-time fighter for the independence of the judiciary, the introduction of the rule of law in Serbia, and an opponent of penal populism. Owing to his statements against the violation of the constitutional guarantees of separation of powers, the independence of the judiciary and the negative trends in the respect for the rule of law in Serbia, he has often been the target of verbal assaults, both by Serbian government representatives and the tabloid media.

“With his work thus far and his personal example of steadfastness in the struggle for the values ​​he believes in and which we in the European Movement share with him, Miodrag Majić deserves the Contribution of the Year the Europe award in every respect”, he added.

Međak recalled that, because of his statements against the violation of the constitutional guarantees of separation of powers, the independence of the judiciary and the negative trends in the respect for the rule of law in Serbia, Judge Majić was often the target of verbal assault by the Serbian government’s top representatives and the tabloid media under its control.

Receiving the plaque, Majić said that Europe was seen as a beacon, but that today there seems to be truth to the convictions that Serbia is further from Europe than when she was not manifestly progressing towards it.

“I see the award as an incentive, rather than a recognition of what has been achieved. Much remains to be done for this piece of land of ours, not just geographically, but in the fullest sense, to become Europe” Majić stated