ENLARGEMENT IS AND WILL BE A BATTLE 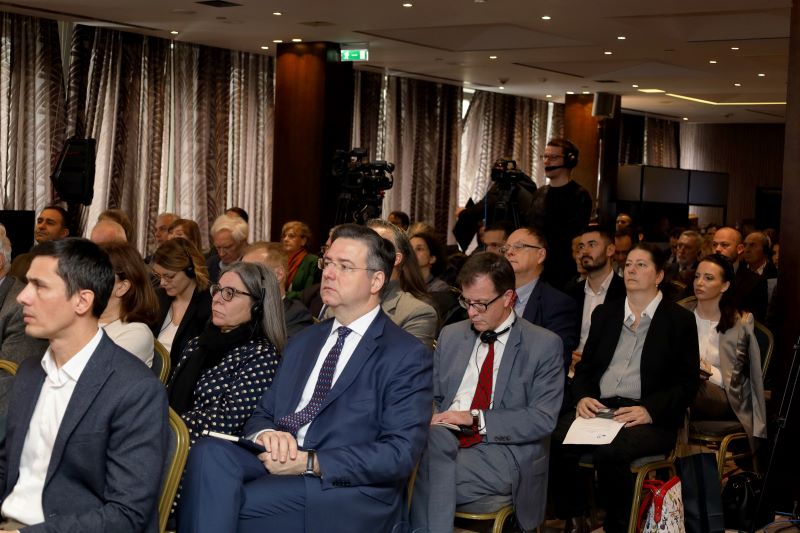 ENLARGEMENT IS AND WILL BE A BATTLE

With the panel “Far away so close – how far we have come with European integration” and the ceremony on the occasion of 30 years of EMinS – the Week of the European Movement and European Integrations ended. 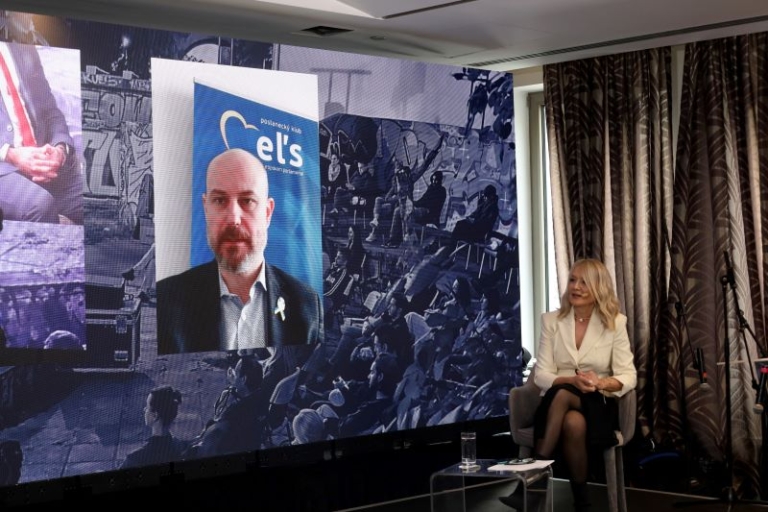 Opening the final event, the General Secretary of EMinS, Zvezdana Kovač reminded that the European Movement in Serbia was founded exactly 30 years ago, which makes it one of the oldest and, according to many, the most influential non-governmental organizations in Serbia. She said that the European movement had the same goals from the very beginning to this day – a European Serbia. “Serbia in the European Union is our goal, but above all it is important that the state of Serbia and all of us together, do everything we can, and primarily for ourselves. In that case, a membership that seems far away can be very close,” said Kovač.

When asked how far Serbia has come in the process of EU integration, Vladimir Bilčik, the EP’s special rapporteur for Serbia, pointed out that even though a lot has been done, more is needed. “Enlargement is a battle and will be a battle.” Harmonizing the policy of the countries of the Western Balkans with the policy of the EU regarding sanctions against Russia is only one of the elements that should be managed. Bilčik also emphasized that progress is needed in Serbia in terms of the rule of law and the state of democracy.

EU expansion is again at the very focus of the agenda, Bilčik said, and encouraged Serbia to “be on the right side of history in the context of the war in Ukraine.” 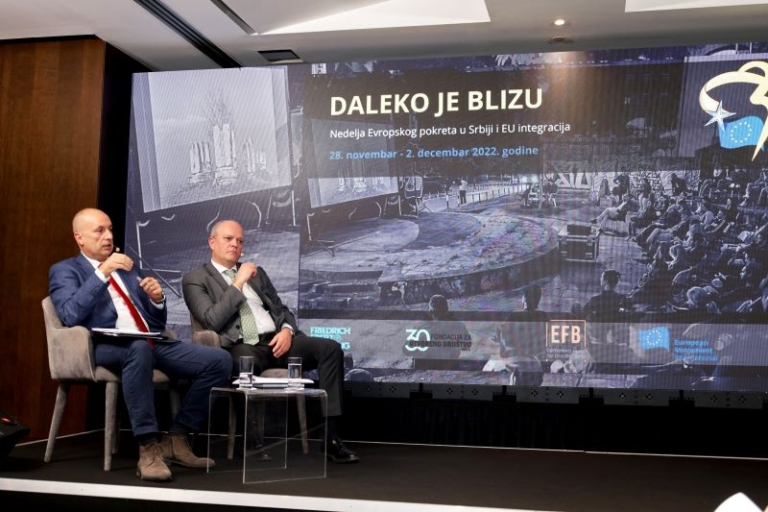 Miloš Todorović, V.D. assistant minister for the EU in the Ministry of Foreign Affairs of Serbia, said that Serbia has an obligation to protect its national interests, which also partially applies to Russia. Serbia practices European values, but the European Union does not, as shown by a recent move (referring to the appointment of Minister Rašić in the government of Kosovo), which is why Serbia will not participate in the Summit of the EU and the Western Balkans on December 6th in Tirana.

Vladimir Medjak, an expert on EU integration and a member of the EMinS’s Main Board, said that this is a wrong move, since others will have the opportunity to say what they want, and Serbia will not be there to present its position.

Medjak, also highlighted the problem of reporting on the EU. “If in 2014, 50% of citizens knew that the biggest donor of Serbia was the EU, and only 20% thought that it was Russia and China, 10 years later even though nothing has changed with regards to the biggest donors to Serbia, the public opinion has changed, that’s the point of the report”. 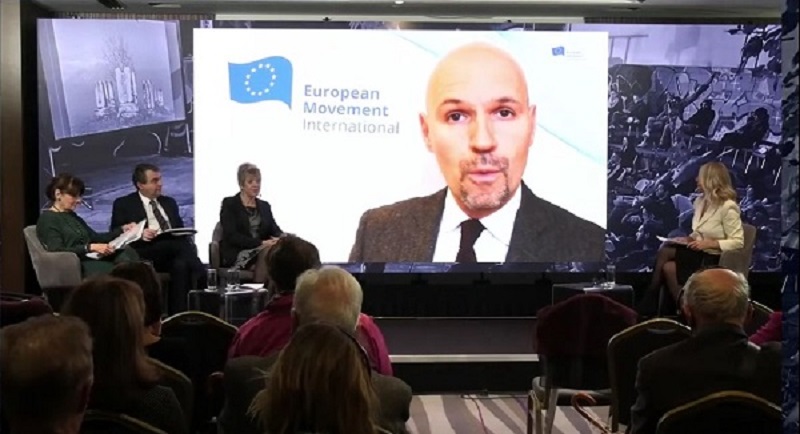 Petros Fassoulas, the Secretary General of the International European Movement acknowledged that the work that EMinS has been doing for the last 30 years has been crucial in crafting a common, joint and integrated future for our continent. He noted that the place of Serbia in that future is integral, especially the work that EMinS is doing to ensure that the European journey of Serbia towards its membership in the EU is certain. Mr. Fassoulas exclaimed: “Because at stake today is not just the membership, but rather a democracy in Serbia, the values EU stands for and the values EU represents. And that is why the work of the EMinS is of importance, because you are fighting every day to ensure that those values remain alive, healthy and are strengthened.” Mr. Fassoulas pointed that it is of great importance that all the stakeholders, both political and civil society come together, cooperate and congregate with EMinS, creating alliances and gathering the strength to ensure that policy makers and citizens remain loyal to the idea of future membership of Serbia in the EU. 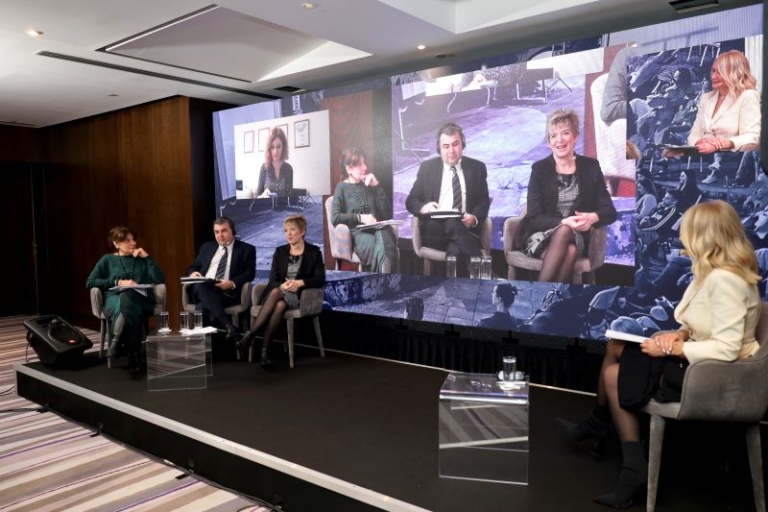 In the part of the panel on regional cooperation, Adrian Davidoiu, Romania’s special envoy to the WB, when asked about Romania’s motives for appointing a special envoy, said that his country has historical ties with the region. “Russia’s aggression threatens stability not only in Europe, but also threatens the foundations of international law, and we believe that it is all the more important to be more involved in the Western Balkans,” Davidoiu said.

Elvira Kovač, vice-president of the Serbian Parliament, said that she believes that “the regional cooperation of deputies should be strengthened, that is, the parliamentary dimension, and not only the cooperation among the highest state officials”. We were recently in Budva, Kovač said, and it was a successful step. “The parliamentary level and talks between us can contribute a lot when it comes to regional cooperation”, concluded Kovač.

“Regional cooperation is one of the hot topics in the Western Balkans”, said Jovana Marović, former Vice-President of the Government of Montenegro and Minister for European Affairs in the Government of Montenegro, adding that “we standardly integrate regionally and cooperate regionally”. Marović pointed out that there are good initiatives, but, alluding to the Open Balkans, there are also those in connection with which there are numerous controversies.

She believes that the Berlin Process is the most suitable framework for cooperation. “Why don’t we invest all our energy in one initiative, in my opinion it is the Berlin process, and then use the good will of the countries participating in the Western Balkans to incorporate what is good in the Open Balkans into the Berlin process,” Marović said.

Then, referring to the presentation of Miloš Todorović, V.D. Assistant Minister for the EU in the Ministry of Foreign Affairs of Serbia, also said that “you cannot say that we do not have to harmonize our foreign policy with the policy of the EU, because we are not currently a member”.

Elvira Kovač, vice-president of the Serbian Parliament, responding to Jovana Marović’s comment, said that “we all know that we should align our foreign policy with EU policy when we become a member. Unfortunately, we have no idea when that might happen, and that’s why you can’t attack Serbia. The Government of Serbia conducts foreign policy and decides when and what level of sanctions will be introduced or not.”

The average citizen does not differentiate between the Berlin process, the Open Balkan, etc., Kovač said, also emphasizing the poor communication.

The President of EMiNS, Jelica Minić, believes that “a mistake is often made when the Open Balkans and the Berlin Process are mixed up. Under the auspices of the Berlin process, the idea of ​​a common regional market was born, and this is where the kind of competition took place. Another problem is how much this initiative promises, how much it unites, and how much it divides.” The Open Balkans does not have a long-term perspective, as does the common regional market, Minic said. Citizens’ support for regional cooperation, she emphasized, is constant at 75% (according to the Balkan Barometer of the Council for Regional Cooperation), in contrast to support for EU integration, which has declined and hovers around 60%.

Open Balkans shows how important narrative and intensive communication are. “75% of citizens’ support cannot be ignored. If the EU was present in the media as much as Open Balkans was and in such a positive way, we would be much closer to the EU”, said Minić.

The panel “Far away so close – how far have we come with European integration”, including other events during the Week of the European Movement and EU Integration was realized with the support of the Friedrich Ebert Foundation. The event was also supported by the Open Society Fund, the European Fund for the Balkans, the Konrad Adenauer Foundation and European Movement International .

The entire panel, as well as the ceremonial addresses on the occasion of 30 years of EMinS, can be viewed here.

Photos from the event