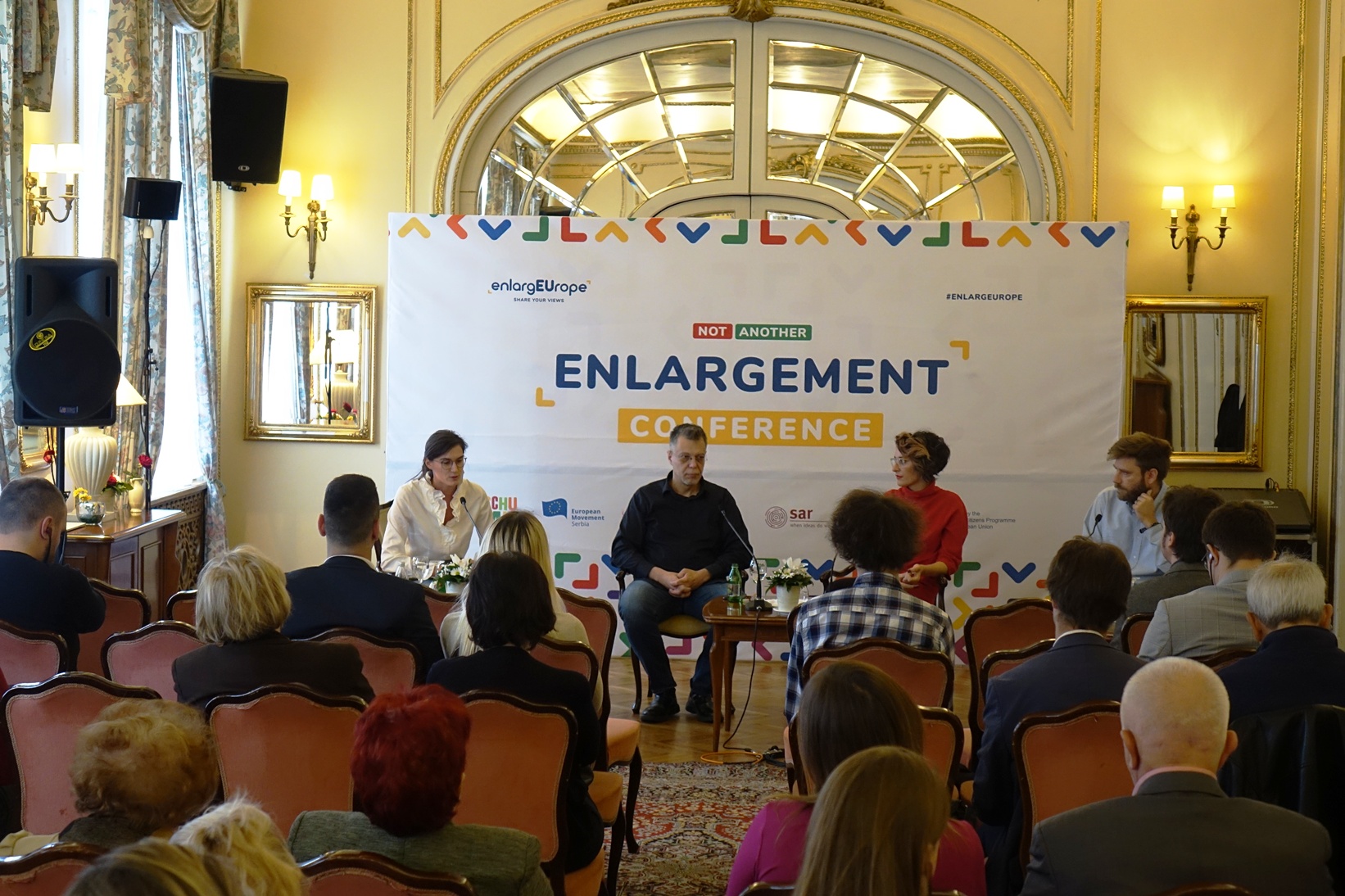 Decision makers have to find a better way to communicate the EU to the citizens – participants concluded at the discussion at the Not Another Enlargement Conference, that has marked the end of the project EnlargEUrope. European Union has been sending mixed messages to the countries of the Western Balkans which has significantly impacted the trust of the citizens in the process of European integration.

The first panel moderator, Tijana Rečević, teaching assistant at the Faculty of Political Science, pointed out the contradictory messages from the EU side to the countries of the Western Balkans.

“A clear no has finally come at the end of October in Macron’s stand that without internal reforms, there can’t be talks about enlargement. Still, just couple days ago a French non-paper sufaced suggesting some type of certainty of European perspective for the Western Balkans.

Novelist and literature translator, Dejan Tiago Stanković, spoke about his experience living in one EU member state – Portugal since the time of its accession.

“A state is a service to citizens and it is important for the laws to be respected, which is the case in the EU so far. I know where the largest amount of taxes I pay ends up. In Serbia, I’m sure I don’t know”, he said and added “from my point of view, the EU is like a colonial empire that is not exploiting its citizens, but rather educating them”.

Co-founder of the Centre for Biopolitical Education, Marija Ratković, saw the European Union as “the version of the golden standard, but also wrong interpretation of political correctness”. She is hopeful that the accession of Serbia and other Western Balkans countries in EU can bring firmer order in the state.

While speaking about the great influence of social media in communication today, Ratković especially pointed out that it is important to fight together the re-traditionalization and fascinization of Europe through nationalist tendencies.

The journalist of njuz.net Viktor Marković said that he has, against his own will become a better expert on the EU than the citizens of EU, being exposed to intensive listening about European integration for the last 20 years. He also pointed out that the information about EU are boring and that they are people putting people off.

“In communication with young people about EU, I  would personally try the reverse psychology, because it is certain that whatever you say to them, they do the opposite”, said Marković and reminded that we as a nation were more lead by our emotions, rather then facts, which is distorting the real image of EU and future membership.

The topic of the second panel was how the European Union is communicated in Europe. The representative of NGO Gong in Croatia, Dražen Hoffmann, spoke about the experience of his country during the campaign for organizing the referendum about the accession.  He accentuated that the process of Croatia’s accession has changed during the big joint project of building consensus among political elites and constitutional reforms in 2010.

“Even though all the governments of Croatia since 2000 have expressed  their orientation towards EU accession, the elites considered including citizens in the process irrelevant and that was missing”. That was the reason of rather week results in the referendum Hoffmann said.

The representative of Entrepreneurship Promotion Association YEPA, Indre Kulešiene, spoke about how Lithuania accessed the EU. She has pointed out that the communication was cut down to informing citizens about the benefits of accessing the EU, like open boarders and higher salaries. She also added how today Lithuanians have to change so they can contribute better to the functioning of the EU.

The CEO of Alfa Centre in Montenegro, Miloš Perović, explained that Montenegro made EU accession and  NATO membership the two foreign policy priorities, adding how these processes were even though parallel completely different. Integrations in the NATO has been loaded with memories of bombardment of Yugoslavia in 1999, while in public discurs negative campaign on the EU does not exist.

Perović accentuated European integration as “softener for the Atlantic component of the integrations”, concluding how there are three important factors for that process: the relationship with the youth, pre-accession funds and the freedom of the media. In Montenegro the campaign for accession is a collaborative work of government and civil sector.

The manager of the project for Romanian Academic Society, Cristian Ginghes said that Romania, even though being a member for 13 years was facing the paradox of young people leaving the country.

“We are second only to Syria in youth migration,” he said. Ginghes pointed out the doubled GDP of the country, the termination of roaming charges, student exchanges, and agriculture subventions as the positive sides of Romanian membership in EU. However, inefficiency and non-transparency in building the country’s infrastructure he saw as the bad effects of Romanian politics.

The representative of Polish Robert Schuman Foundation, Mateusz Lewandowski, thinks that the common citizen of Poland sees EU as a vault.

“European Union is exclusively a source of funding for the Poles and that is why we have to focus on educating the citizens and not on the propaganda”. He also warned on the possible threat the social media poses to civil society that started building after the transition in Poland.