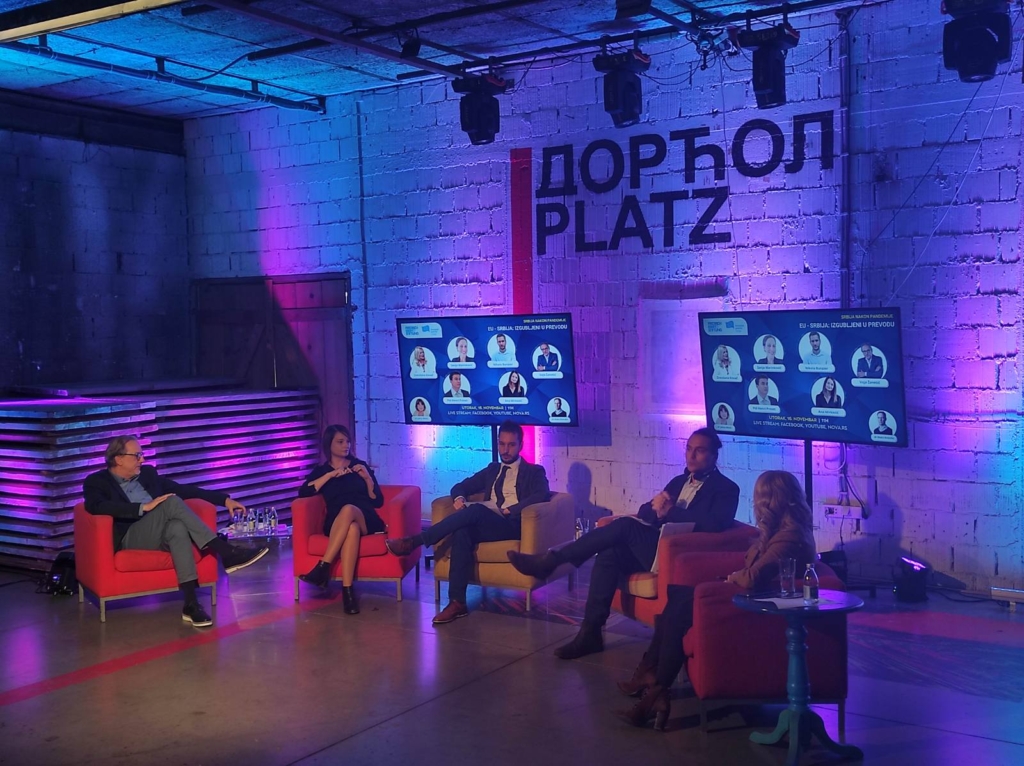 Whether and to what extent insufficient communication can contribute to the rise of Euroscepticism in Serbia, what can be done to improve communication about the EU and how to respond to false news and misinformation, were the questions of yesterday’s panel “EU-Serbia: Lost in Translation”, organized by the European Movement in Serbia and the Friedrich Ebert Foundation.

The President of the European Movement in Serbia, Jelica Minic, pointed out in the introductory part of the panel that communication on the European Union must be two-way. According to her, although Serbia has a problem in objectively informing citizens about the benefits of joining the EU, the European Union also has difficulties in communicating with the public of the countries covered by the enlargement process. Results in the field of combating Euroscepticism can only be achieved through the joint efforts of the academic community, domestic media and citizens.

Paul Henri Presse, head of the communications and media service of the European Delegation to Serbia, agreed that objective information about the EU is difficult to reach for Serbian citizens, adding that it is in the European Union’s interest for Serbia to join as a member.

“Every time we send the same message and that message is that all members of the European Union want Serbia to join. However, that message obviously does not reach people. The key problem is insufficient in-depth coverage of the domestic media on the benefits of potential entry into the European Union. News about the EU is present but shallow. They do not sufficiently reflect the public’s opinion when it comes to the integration process “, concluded Henri Prese.

Psychologist, communication specialist, Ana Mirkovic, believes that the majority of Serbian citizens have gained the impression that the state does not have a unified position on the issue of joining the European Union.

“I think it is no longer clear to people whether we are moving towards the European Union or not, whether we are for the west or for the east. We are a polarized society and there must be a determinant,” said Mirkovic.

Communicologist and marketing expert, Vojislav Zanetic, doubts that the European Union is a priority on the daily agenda of state officials, taking into account that it is less and less reported in the media.

“Is the story of the EU the main topic at all? Considering that EU-related news are covered by the media up to an hour and a half yearly, while we have three and a half hours of speeches by our president every week, it turns out that the EU is actually a side topic in the life of Aleksandar Vucic,” said Zanetic.

The Program Director of the Center for Contemporary Politics, Nikola Burazer, believes that the EU should point out the specific problems that the citizens of Serbia themselves see in order to solve them in a better and fairer society.

“We have nothing from promises and from saying that there is a perspective. We need someone to tell us that until some key issues are resolved, for example, Savamala, there is no rule of law present and therefore no EU membership. The same rule should apply to media freedom, ” Burazer concluded.

The panelists concluded that the process of communication about the European Union has been disrupted for many years, which has called into question the EU’s decision to open the next two clusters with Serbia by the end of November this year.

You can watch the panel “EU-Serbia: Lost in Translation” here.