International Conference: Co-operation of the National Parliaments and Independent Bodies in SEE

Home/Books/International Conference: Co-operation of the National Parliaments and Independent Bodies in SEE
Previous Next 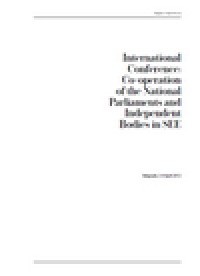 International Conference: Co-operation of the National Parliaments and Independent Bodies in SEE


The Media, as well as constitutional law and political science discourse mainly refer to Parliament as an institution whose core competence is legislative. This, of course, is not wrong, since in the traditional division into the three branches of government, the National Assembly is primarily identifi ed as the holder of the legislature. We often hear that parliaments, in addition to this core function, also perform a representative and electoral function. This is not wrong either, but rather completes the picture and gives a better overview of the work and responsibilities of the institution.

In all democratic countries, including countries in the region, the national parliaments have another very important function – oversight function. It is a function whose substance and democratic practice are developing very dynamically, and both Serbia and the region have passed a long way and achieved a lot in the last decade. It would be impossible to carry out this function properly, comprehensively and for the benefi t of the society without the existence of independent and regulatory bodies – bodies who are responsible for the protection of citizens’ rights and control of the legality of work of holders of public authority. The establishment, competencies and funding of independent and regulatory bodies are regulated by special laws, and they report to the National Assembly which oversees their work.

This brochure is published on the occasion of the international conference “Co-operation of Parliaments and Independent and Regulatory Bodies in South East Europe”. The conference was held on 3rd and 4th April 2012 gathering the representatives of parliaments, international organizations, civil society organizations and independent regulatory bodies from Slovenia, Macedonia, Montenegro, Bosnia and Herzegovina, Albania, Bulgaria, Greece and Serbia.

The establishment and functioning of all independent bodies, especially those dealing with protection of human rights, minority rights, anti-discrimination and prevention of corruption in South East Europe countries, requires continuous improvement of co-operation among all levels of power, independent regulatory bodies, and civil society organizations in order to achieve European standards in all social spheres and create possibilities for citizens to utilize the results of their work. Parliaments should defi ne and implement clear procedures that will | 6 | International Conference: Co-operation of the National Parliaments and Independent Bodies in SEE allow the legislative and executive branch to include independent and regulatory bodies in all phases of the legislative process, this being a precondition for legislative solutions that refl ect the real situation and a guarantee of their acceptance.

Building democratic institutions is a never-ending process, and the role of independent and regulatory bodies in the system of these institutions is indisputably growing more important every day. On the other hand, regional co-operation is not only a necessary condition in the process of European integration, but also one of the key foreign policy priorities of our country. I am convinced that the brochure in your hands and the preceding conference make important contribution to achieving both goals.