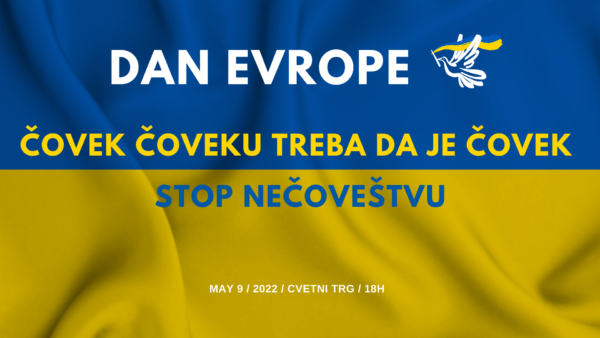 This year, we celebrate Europe Day under the anti-war slogan: “A man should be human to a man – stop inhumanity” expressing our sharp protest against the war in Ukraine and showing due respect to those who died in unimaginable war horrors and destructions that have been going on for more than two months.

You can view the detailed program here:

At 18:00, at the very beginning of the central celebration, live broadcasts are planned from 6 cities in Serbia: Leskovac, Valjevo, Kraljevo, Kruševac, Sremska Mitrovica and Novi Sad (in which the EU Delegation in Serbia organizes the central celebration of Europe Day, at which EMinS will also be present). Also, our young activists will have an interesting street action with the aim of promoting European values ​​through communication with citizens and passersby in city center in Belgrade.

At 18:15, videos under the slogan “Together for Europe” will be shown. The main messages of these video materials, with shocking images of the suffering of the population affected by the war in Ukraine, are anti-war and call for solidarity, freedom and peace.

At 18:30, the youth theater will play “Our world, our rules” by the Malda group from Vranje.

At 19:15 you will have the opportunity to follow Our European conversations in the open air. The guest is Serbian-Portuguese writer Dejan Tiago Stanković.

At 20:30, the awarding of the “Annual Contribution to Europe” award is planned, which the European Movement in Serbia awards every year to an individual, organization or group of citizens who, through a speech, book, concrete action or attitude, have significantly contributed to the process of European integration and the promotion of European ideas and values ​​in our country. the country.

At 21:00, there is a traditional movie night on the program, the theme of which this year is dedicated to the rights of the LGBTQI+ population. Let us remind you that Belgrade is hosting Europe Pride in September 2022. The audience will have the opportunity to watch the movie “Supernova”, directed by Harry McQueen, with Colin Firth and Stanley Tucci in the lead roles.