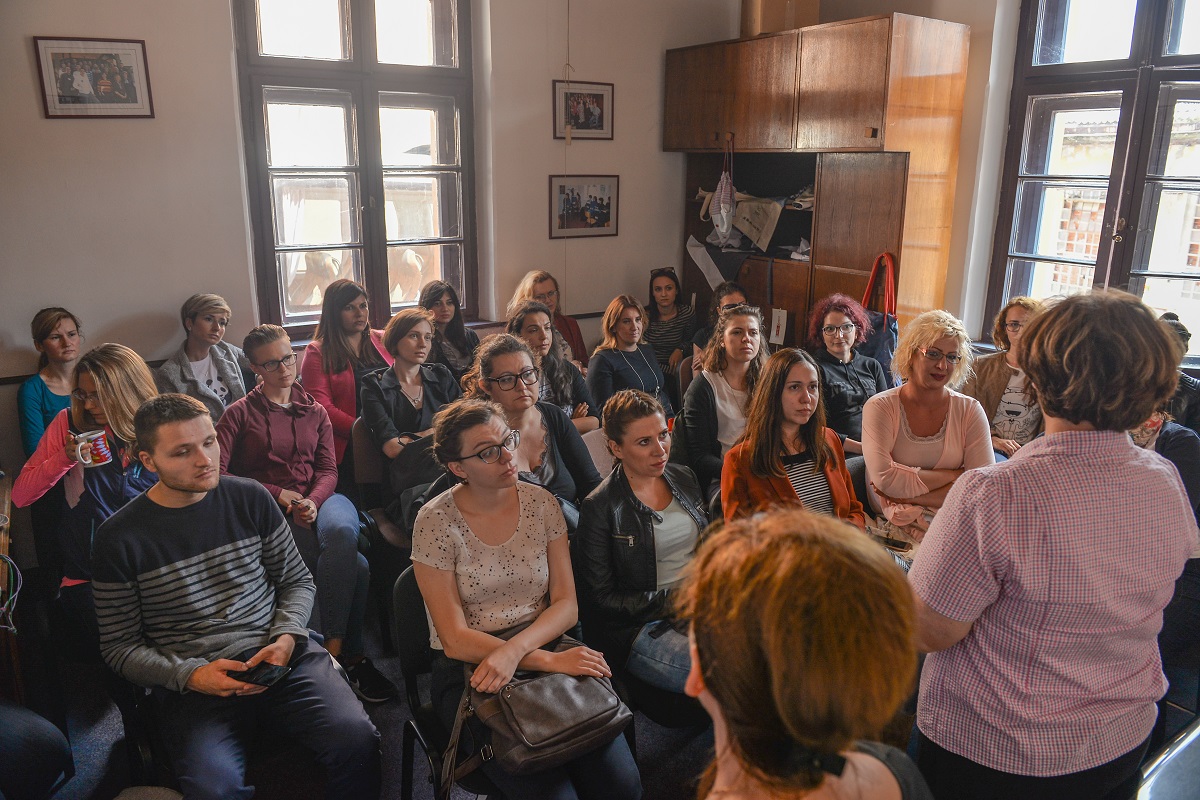 Representatives of the Women’s Center of Užice Rada Gujančić and Marina Tucović greeted participants of the “Share Your Knowledge” program on Saturday, June 30th with a message that “we have no right to give up something so good”. Within the ambiance of the remnants of socialist self-management and a ruined industrial complex, the brave women of the Women’s Center of Užice presented their program founded on three pillars – healthcare, education and the economy and conveyed their experiences in the fight for better livelihood of women in the Zlatibor district.

The provided possibilities of getting information and assistance on combatting cancers that affect women the most, then the possibilities of education on gender to, through gaining theoretical knowledge, becoming able to counter patriarchal values imposing discrimination of women in various forms and finally a program providing women affected by firings and a lack of assistance from relevant institutions options in small business testify to the significance of the efforts and knowledge these women put into fighting for better positions for women from these regions.

Retex is the finest example of their efforts – a social association engaged in recycling textiles along with redesign and manufacturing. At its core it contains three concepts – recycling both types of textile waste, domestic and post-industrial; renewed use with redesign and humanitarian work; then engaging business ideas of manufacturing recycled fiber. Through this, they are working on the reduction of pollution in the textile industry where pollution is significant.

There lies also the expression of the creative spirit of women and getting work affirmation, with special significance for assisting in gaining employment because Retex provides efforts to help women who are not competitive in the work market – women with disabilities and victims of domestic violence – to be integrating into the system and thus continually employed and independent.

Other facts testify to the significance of the Women’s Center of Užice and the resulting Retex to the Zlatibor district – 1 to 1.5 tonnes of recyclable textile is provided through Retex on a monthly basis; they often collaborate with other institutions and they were especially made happy by the cooperation with the Art School of Užice where graduates used materials provided by Retex to make their final submissions for graduation which kick started the Artwork project for young people in the region.

The Women’s Center of Užice in cooperation with the Autonomous Women’s Center started the SOS phone project, on the basis of the Istanbul Convention, for female victims of violence, thus making another great step in the betterment of the position of women in this region. This SOS phone receives 739 calls on an annual level making Užice the second biggest source of such calls, after Belgrade, leading to conclusions that this organization is succeeding in transforming the necessary and often neglected trust of women into institutional support. This outcome motivates them into starting an initiative of regional program integration and, through it, provision of aid for women in other parts of Serbia. The idea is to circumvent the renewed victimization of women after they speak to institutions as it is then worse through the belittlement and threats made for each subsequent call. The basic message is that aid will not slip away and that calling in is the first and most important step as the Women’s Center of Užice provides systemic support as long as every female victim of violence is not familiar with the new and much better life she deserves!

The passion, belief and the will to do good things are the driving force for great change and are the meeting place for people with great ideas and great deeds done. Thus participants of the “Share Your Knowledge” and members of the Women’s Center of Užice recognized a moment for mutual support and empowerment because, as was said beforehand, “we have no right to give up something so good”, as long as the fight is great and long-lasting.

At the end, program participants had an opportunity to feel the splendors of nature surrounding Užice as they had a chance to see the Potpećka cave only a couple of kilometers away from the city. A communal visit to Užice strengthened the fighting and adventurous spirit of our participants and created long-lasting memories!