More than a walk – human rights in Serbia, in the light of Europride

Home/EMinS News/More than a walk – human rights in Serbia, in the light of Europride
Previous Next 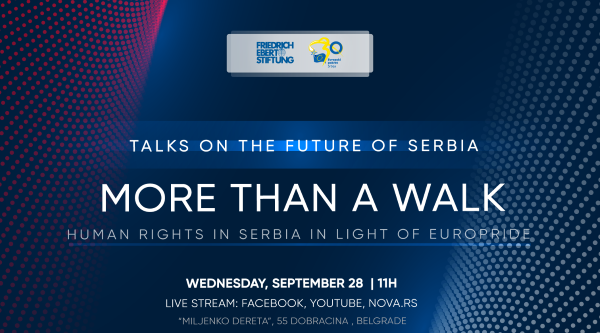 More than a walk – human rights in Serbia, in the light of Europride

On September 28, 2022, the European Movement in Serbia, in cooperation with the Friedrich-Ebert-Stiftung Foundation, held another panel in this year’s Talks on the Future of Serbia cycle, entitled “More than a walk – human rights in Serbia, in the light of Europride”.

The panel addressed various questions: what is the cause of the “ideologization” of the LGBTQ+ community? Why is society polarized when it comes to the rights of the LGBTQ+ community, in the context of East and West? Why is there a lack of a clear and continuous position of the state in its obligation to protect and improve the rights of LGBTQ+ citizens? Why does the Orthodox Church emphasize a very negative attitude towards the LGBTQ+ community? Is there a way to improve the communication of LGBTQ+ efforts and motives to shed light on the difference between social identities (social constructs – national and religious identity) and identities conditioned by nature (sexual and gender identity).

As part of the dynamic discussion on the panel, answers to these and other questions were given from the point of view of experienced activists and experts in areas of importance.

The president of the Committee of Lawyers for Human Rights YUCOM, Katarina Golubović, stated that it is time to pass regulations on the rights of the LGBTQ+ community, that their protection must be strengthened and that the political elite has a great responsibility in this. The process of passing the law on same-sex unions and the law on gender identity was stopped on the basis of “incorrect arguments that the adoption of the two laws would be unconstitutional”.

Zorana Milovanović, project manager at the European Movement in Serbia, stated that one cannot speak of a democratic state when someone believes that as a member of the majority, he has the right to decide on the rights of the minority. Milovanović stated that a false image is being created that members of the LGBTQ+ community have more rights because the Prime Minister of Serbia “enjoys her own rights outside of the institution, uses political power and a political function where she can achieve what the majority of the LGBTQ+ population cannot”.

Orthodox theologian and philosopher Davor Dzalto stated that there is a wider problem when talking about human rights and injustice and oppression to which not only members of the LGBTQ+ community are exposed, but also the majority of citizens of Serbia, especially members of minority communities. “It is a trend that we do not notice only in Serbia, that if you have political or financial power, you are privileged and you have access to what is not available to the majority of citizens, whether they are members of that community or not,” said Džalto.

Jelena Vidić, coordinator for psychological support at the Geten LGBT+ Rights Center, stated that it is a big problem that Prime Minister Ana Brnabić does not speak publicly about the problems of the LGBTQ+ community. The Prime Minister, as she said, cannot marry her partner, on paper she is not the parent of her child, and in that sense she is discriminated against, although she does not speak about it publicly.

Advocacy coordinator from the association Da se zna! Ana Petrović stated that the LGBTQ+ community is disenfranchised and that the state must show the political will to not only talk about these topics, but to work on passing laws. She said that they had good cooperation with the Minister for Human and Minority Rights, Gordana Čomić, but that now the question is whether that ministry will remain in the new government and whether she will remain at its head, so they will be able to continue where they left off, or it will go back to the beginning.

This panel is part of the “Talks on the Future of Serbia” cycle, which is held once a month, in cooperation with the Friedrich-Ebert-Stiftung Foundation in Belgrade.