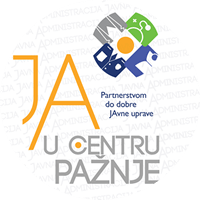 The EU accession process of Serbia implies ambitious and comprehensive public administration reform (PAR). Bearing in mind that since 2014 PAR is defined in the main strategic documents of the European Commission as one of the three reform pillars in the EU enlargement policy, focus on this horisontal reform – which represents substantially a prerequisite for achieving success in all other sectoral policies – has significantly grown.

The project “Partnership for Public Administration Reform and Public Services in Serbia – PARtnerships” aims to contribute to the creation and implementation of policies in the area of public administration reform ensuring more participatory and citizen-centric design and improving accountability and responsiveness of the Serbian government for the quality of services it delivers. Working both at the level of policy development and community level, the project will focus on improving quality and transparency in designing and delivering the most requested types of public services in the area of health, education and internal affairs.

The goals of the project:

To deliver methodologically solid evidence on citizens’ satisfaction with three widely used and salient public services, as one of the key reform areas under the EU accession framework for PAR, and on the quality of policy making in those policy areas

The narrow focus of activities will be three major groups of public services in the field of health, internal affairs and education:

Services in education sector – enrollment of children in preschools and primary schools.

Organisation of four (4) interactive workshops of CSOs and representatives of relevant institutions which will focus on strengthening and further expanding of the civic engagement and dialogue in the PAR area, as well creation of the broad network of CSOs in the area of PAR.

Implementation of the national campaign “ME in the spotlight!” with the aim to include citizens in the process of PAR. The Campaign will enable collection of stories/testimonies of citizens about their experience with the three groups of public services covered by the project (health, internal affairs and education) through interactive web-portal and large number of local actions and manifestations in 12 cities/municipalities.

Implementation of comprehensive research on the process of public policy development and the citizens’ satisfaction with the services provided in targeted areas using qualitative and quantitative methods.

As a result of all project activities, a Grey Book of Public Services will be produced consisting of the most important results of the project.

Project is supported by the U.S. Agency for International Development (USAID/Serbia).