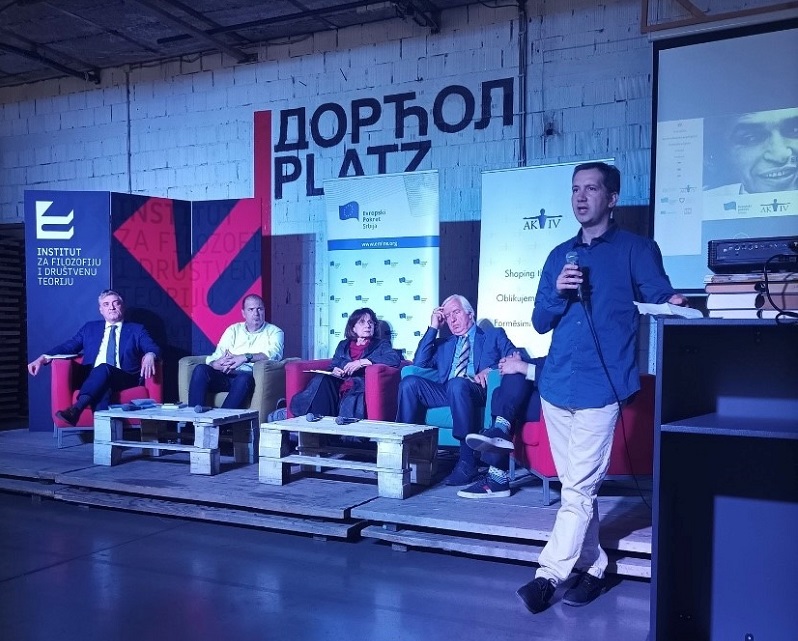 Tobias Flesenkemper, head of the Council of Europe office in Belgrade, Jelica Minić, president of the European Movement in Serbia, Miodrag Milićević, director of NGO Aktiv from Mitrovica, Fahri Musliu, journalist and publicist from Prizren, and journalist Idro Seferi, all presented the website and engaged in a discussion.

At the beginning of the presentation, Aleksandar Pavlović, one of the authors of the website, addressed the audience and pointed out that, among other things, you can find literary material, articles and texts by authors that talk about Serbian-Albanian relations, as well as interviews with prominent intellectuals. on how to improve dialogue and overcome animosities.

Miodrag Milićević said that taking into account the broader picture of the Brussels Agreement, despite the fact that the dialogue is at a standstill, no additional progress is taking place. What is positive is the contribution to reducing tensions on the field. “Is that approach enough? It’s not. We note that negative rhetoric, constant tensions have a negative effect on both the Serbian and Albanian communities.”

Speaking about the relations between Serbia and Albania and the perspective of Serbian-Albanian friendship, the president of the European Movement in Serbia, Jelica Minić, pointed out: “in the end, everything always depends on political readiness, whether it is achieved through a rational approach or political pressure. Everything always comes from the top, although there are good solutions at the local level”. According to Ms. Minić, Kosovo’s goal is to gain independent status, to be an internationally recognized state, and Serbia’s goal is to drag it out as long as possible. “There is a higher force at the moment, and it may be able to make some progress. We will now be faced with energy and food problems, with a new wave of impoverishment of the population, with people’s attempts to find work, with the need to open up the entire region so that people can work if they do not have a job where they live. It’s already happening and it’s already underway.”

Fahri Musliu believes that the dialogue between Serbia and Albania is problematic because both sides entered with great mistrust and after each meeting conflicting statements are made. “It drives people crazy, and people have lost hope in that dialogue.”

Journalist Idro Seferi states that the goal of the dialogue should be that there is no more war, that people face the past and have a future that they create themselves. “The only way for any development is to overcome archaic policies and dialogue. It must lead to people decompressing and then slowly talking about crimes and other things and making some future projects.”

The project “Improving Serbian-Albanian friendship, making available common educational content and content for reconciliation through a multilingual portal” is jointly implemented by the NGO Aktiv from Kosovska Mitrovica and the Institute for Philosophy and Social Theory (IFDT) from Belgrade, in cooperation with the European Movement in Serbia, and with the support of the Swiss Embassy in Pristina.

You can watch the recording of the presentation and discussion here.