Home/Active projects, EMinS News/Rendezvous in the EU: citizens of France and Serbia on the EU enlargement process
Previous Next 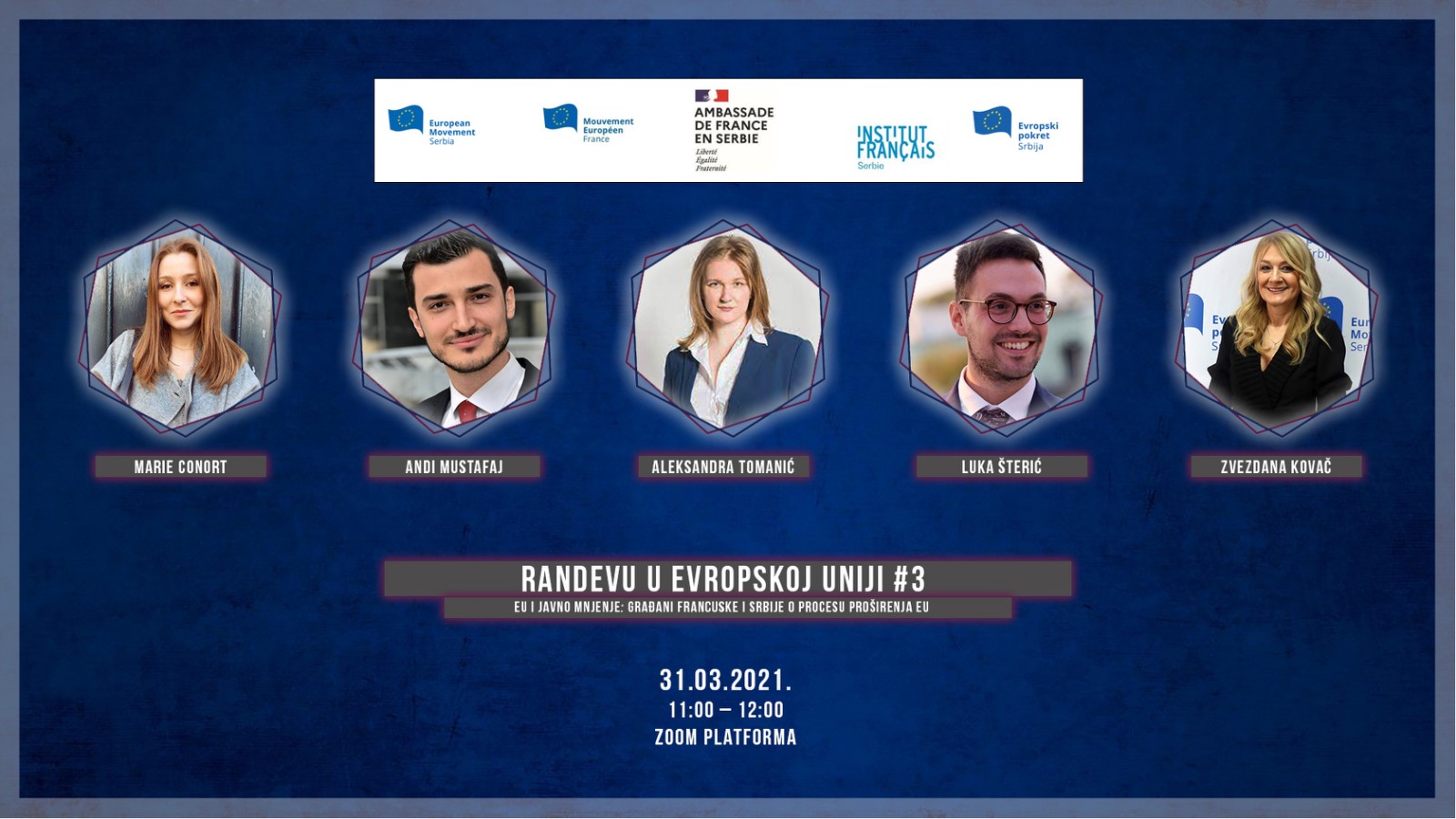 The attitudes of the citizens of France and Serbia on the topic of EU enlargement are not based on credible information and education, but mostly on prejudices and emotions. The governments of the states must direct their policies in practice towards the enlargement process and not only in narratives.

Luka Steric, researcher at the Belgrade Center for Security Policy, referred to the reasons for Euroscepticism towards the enlargement from both perspectives, Serbian and French.

“The data is disappointing. As many as 2/3 of people think that Serbia will not join the EU and do not believe that anything will change on that issue. The EU has lately been facing rather poor management of crisis situations, which has darkened the image of Europe as an ideal place to live. These issues represent the economic crisis in 2008, the refugee crisis, and now the crisis regarding the distribution of medical care and vaccines in Europe, which is quite poorly resolved. As for Serbia, we cannot ignore the rather strong anti-Western narrative of both the ruling party and the media that are under the auspices of the government. Then there is, of course, the issue of Kosovo,” said Steric.

Marie Conort, project manager of the working group for enlargement at EuropaNova, stated that the ties between Serbia and France date back to the 19th century and that these two countries were even allies in the First and Second World War. However, Conort adds, the problem is that this connection does not exist between the citizens of these two countries.

“Serbia has a good reputation in France, but the citizens of France are not ready for new enlargements and we have to work on that,” Conort concluded.

Andi Mustafaj, coordinator of the working group for enlargement in the European Movement of France, said that it is important for the citizens to connect with each other.

“When it comes to the process of EU enlargement, specifically the integration of the Western Balkans into the EU, it is necessary for the citizens to be well informed. About 60 percent of citizens are against integration, without being aware of the benefits they can have from the enlargement process. We see that this is not a personal opinion, but it is more a reflection of the EU’s attitude towards enlargement. Those who oppose integration are, in fact, opposed to the way the EU works. They think that the EU would function better with a smaller number of states. About 1/3 of the respondents think that the integration of the Western Balkans will affect their lives. We must improve the way of informing the citizens, to promote ideas and information on social networks, to educate the citizens about the importance of EU enlargement,” Mustafaj pointed out.

Aleksandra Tomanic, executive director of the European Fund for the Balkans, stated that the French opinion on enlargement is related to frustration and dissatisfaction.

“It is more a fear of the unknown, fear of consequences for the individual, and that fear should be dealt with. Opponents of enlargement know how to use those fears. We need to bring back the emotion and enthusiasm that once existed. Prejudice is as big of a problem as corruption. The Western Balkans are often equated with corruption, but that is not the exclusivity of the Western Balkans. In France, the former president was sentenced to 3 years for corruption, and that is the key difference. Corruption is universal, but the difference is in the institutions. The enlargement process should contribute to building and strengthening these institutions. In a briefing for the European Parliament on public opinion and the positions of states, we have the following sentence: the French government is firm in its position to reform the European institutions and to ensure common policies before any further enlargement. This was said in April 1999. That attitude has been there for more than 20 years and it has nothing to do with the Western Balkans and this latest planned enlargement. It is a more complex and far-reaching thing. We need to regain enthusiasm. The EU was a promise of a return to dignity – from a financial, institutional, and value standpoint. That promise is no longer credible and we must work to return it, “Tomanic stated.

Tomanic also referred to how the Germans view the process of EU enlargement to the Western Balkans. She pointed out that they are against the enlargement in the same percentage as the citizens of France.

“However, the policy towards enlargement is completely opposite when it comes to France and Germany. Germany rarely approves enlargement. Any enlargement has resulted in either further deepening existing policies or conducting new ones. Those two things never excluded each other and so far they have always gone together. We are now in that kind of vacuum, where no one has to deal with problems. However, this vacuum will not be able to last long and survive. If the EU does not come here, the citizens will go there on their own,” Tomanic concluded.

The panel on public opinion of the citizens of Serbia and France on the topic of EU enlargement was the third panel in a series called “Rendezvous in the European Union”, supported by the French Embassy in Serbia and the French Institute in Belgrade.

You can watch the panel HERE.