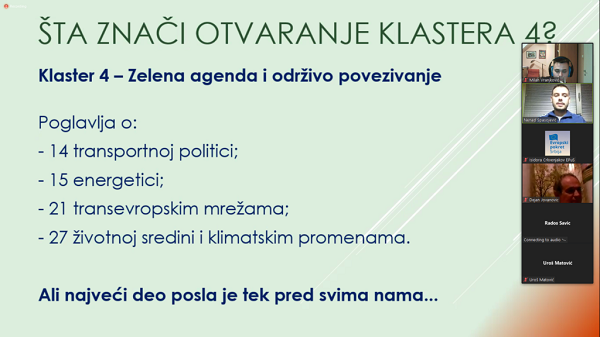 The European Movement in Serbia has successfully organized an online round table with local CSOs and public sector representatives on the topic “CSO Initiatives for Improving Local Environmental Policies”. The online round table was realized as an activity within the project “Green Agenda at the Local Level”, implemented by members of the Network of the European Movement in Serbia in six local communities: Leskovac, Belgrade, Sremska Mitrovica, Krusevac, Kraljevo and Valjevo.

In the introductory part of the discussion, Nenad Spasojevic, an expert from the Center for Policy and Strategy Creation, said that despite the opening of Cluster Four in the accession negotiations with the EU, which includes a green agenda, Serbia has a lot of work to do.

“You can see the opening of the cluster as the beginning of your university studies. You finish the entrance exam, enroll in the faculty and then you have four years of study”, said Spasojevic.

The participants assessed that Serbia has a long process ahead of them, as well as that the non-governmental sector will have a large share in all this, during which they referred to the problems that civil society organizations face when they want to carry out local actions in the field of environmental protection. On this occasion, the participants concluded that non-governmental organizations should be more involved in public debates, as well as that this requires the support of colleagues and mutual networking of organizations, media and the public.

Vanja Jaksic from WWF Serbia pointed out that the competent authorities must keep in mind the role of CSOs when making decisions related to the newly opened cluster.

“We need to work on improving inter-sectoral cooperation and involving all citizens in making crucial decisions that affect them and the environment,” said Jaksic.

The representative of informal group “Battle for Kosutnjak” Dejan Jovanovic said that the opening of Cluster Four only complicated the situation with activists on the ground, since, according to him, the EU should first talk to citizens and associations to obtain more accurate information regarding the status of the environment in Serbia.

The participants of the round table concluded that informal education in the field of climate change mitigation is necessary for raising environmental awareness of citizens in order to act together in environmental protection.