SERBIA AFTER THE PANDEMIC: RIGHT TO INFORMATION 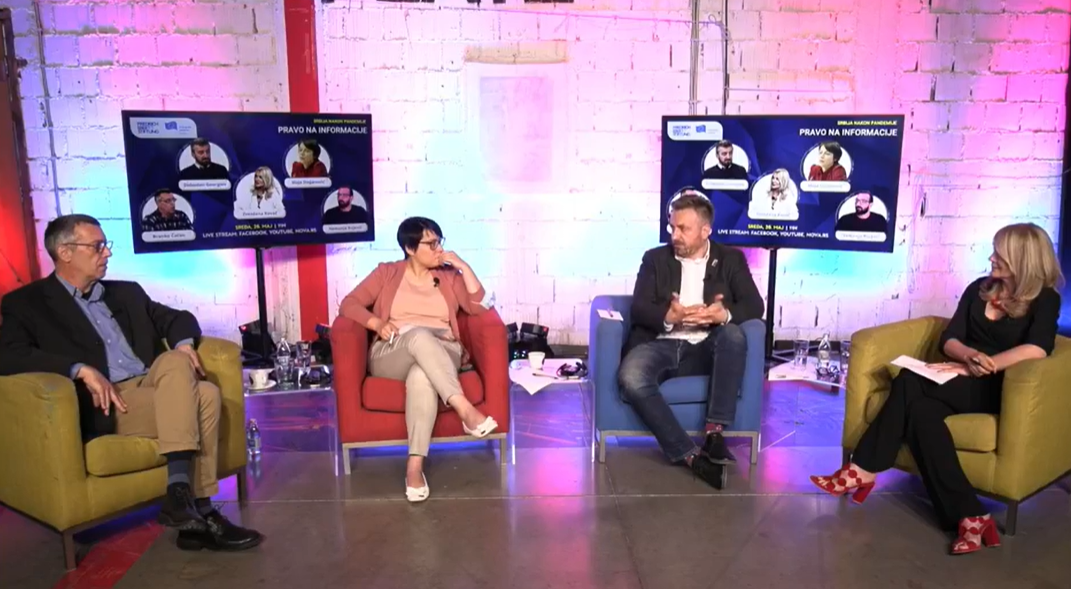 SERBIA AFTER THE PANDEMIC: RIGHT TO INFORMATION

The Law on Free Access to Information was one of the best laws in the world, but today institutions are no longer answering citizens’ questions, so the citizens’ rigth on access information is violated. The media will always be an indicator of democracy in society, because of the fact that they are not the cause of anything, but a consequence of fundamental things in the country, and investigative journalists gathered in civil society organizations need mainstream media to make their stories visible, concluded the Right to Information panel held today in the organization of the European Movement in Serbia and the Friedrich Ebert Foundation in Belgrade.

The panel, stating that Serbia has a lot of work to do in the field of media freedom and citizens’ right to information if it wants to join the European Union, was opened by the Secretary General of the European Movement in Serbia (EMinS) Zvezdana Kovač. She recalled on of the research of the World Press Freedom Index, where Serbia ranks 93rd out of 180 countries.

Instead of advancing, we are going in the opposite direction, as evidenced by the fact that we were on the same scale, six years ago, in 54th place.

Executive Director of Civic Initiatives Maja Stojanović assessed that it is crucial to inform every citizen not only that they have access to documents issued by the Government or an institution, but also to know what is happening in the country so that they can make important decisions, whether about voting or about their daily life. She stated that the Commissioner for Access to Information of Public Importance brought about 3,000 decisions in 2020, and that half of those decisions referred to institutions that did not answer the questions of citizens, media or the civil sector at all. “The institution of the Commissioner is endangered and neglected by the authorities”, said Stojanovic, with whom the other participants in the debate agreed, and warned that amendments to the law were being prepared that would further restrict the right to access information of public importance.

The director of the Center for Investigative Journalism CINS, Branko Čečen, emphasized that investigative journalists need “mainstream media” that will make their stories visible to citizens. “In our country, between the worst trash and nothing, there are media that try not to resent the regime, and it is sad and undignifying to live in such a country, and it is undignifying to live with people who don’t care, that it is difficult to find motivation if you are engaged in journalism”, said Čečen. He emphasized that he is worried that the majority of citizens in Serbia think that they should not be informed, they do not think that they should have certain rights and freedoms, and he believes that without that there will be no change for the better.

Deutsche Welle journalist Nemanja Rujević assessed that politicians and institutions answer to the media only when it suits them, regardless of what the questions are. “Why does it pay for the authorities in Serbia not to answer to the media’s questions? The desire of the authorities to never see anyone who would criticize them is noticeable, because they simply do not need it ,”he said. Rujević believes that “censorship of scope, not content” is present in Serbia, that is how many people are allowed to see what is being said, which, in his words, is “strictly controlled”.

The panel “Right to Information” was another event from the series of panels “Serbia after the pandemic” organized by the European Movement in Serbia in cooperation with the Friedrich Ebert Foundation from Belgrade. You can see the whole panel here.