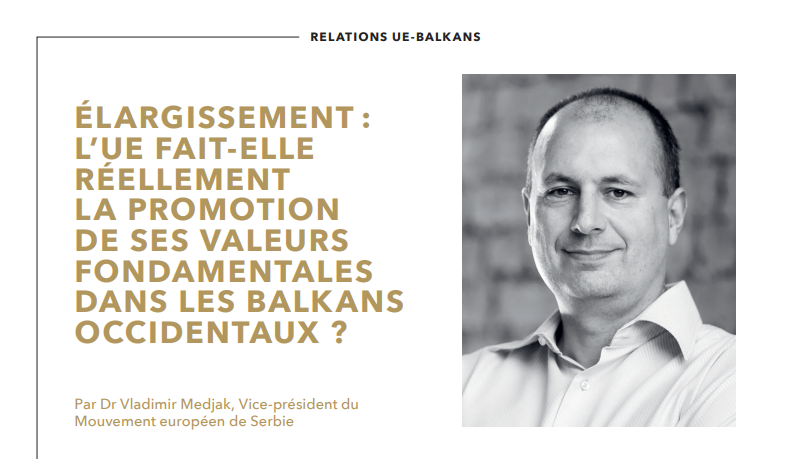 Dr Vladimir Medjak, Vice-president of the European Movement in Serbia for Confrontations Europe

The EU Enlargement to the Western Balkans –

Is EU Really Promoting Its Fundamental Values in the Western Balkans?

According to the Article 2 of the Treaty on European Union, “the EU is founded on the values of respect for human dignity, freedom, democracy, equality, the rule of law and respect for human rights, including the rights of persons belonging to minorities”.

Article 49 of the Treaty defines the respects of and commitment to promote these values a condition for application for membership, making the enlargement a value-based process.

The enlargement to the Western Balkans (WB) has been going on for 22 years with very disappointing results. Only Croatia joined the EU in 2013 and Montenegro and Serbia are negotiating accession since 2012 and 2014, respectively. Others have yet to start negotiations.

Contrary to their countries, citizens of the WB are joining the EU, but individually, migrating in tens of thousands, every year. The WB is being depopulated, increasingly faster, as living in the EU is generally recognized as a better option. The brighter (economic) prospects for the future, and predictable and safe surrounding, directly linked to the democracy, rule of law and protection of individual rights have a strong attractive force for citizens in the WB.

One might ask why is this still the case after 22 years of the enlargement process? Should not the gap between the EU and the WB be narrowing by now? Looking at the situation in Serbia, as one of the “frontrunners” in the process, one can see that the process is not going in the intended direction, quite the opposite.

In the 2015 annual report, the European Commission assessed rule of law area in Serbia with an average grade 2.2 on the scale 1 to 5.

One might expect that seven years of the accession negotiations would get Serbia closer to if not on par with EU levels. However, over the years we are witnessing the opposite process:

The only one not registering this demise of democracy in Serbia is the European Commission, who assessed Serbia the same way in 2021 as it did in 2015.

Today, Serbia has almost all elements of a captured state. Institutions are not performing their duties. Power is concentrated outside the Constitutional framework in the hands of the President. There is only one major TV outlet not under control of the Government, but it is visible by not more than 50% of population. Investigative journalists are under pressure. Civil society is being illegally investigated for money laundering. Hate speech is the new normal. The political situation in Serbia is taken back to the level of the early 1990s’ with almost reinstated single-party regime with only 7 out of 250 MPs not supporting the Government in the Parliament.

Lack of proper monitoring and adequate reactions by the EU officials responsible for enlargement, as well as officials of Member States, made downfall of democracy in Serbia overlap with EU accession negotiations. Those that were supposed to safeguard the accession process bringing Serbia closer to EU, also regarding the respect of EU values, actually supported the opposite process by legitimising it. This was done by courtesy visits made two days before elections, undiplomatic praising of the Government, making falsely positive EC reports and by opening negotiation chapters on environment and energy while tens of thousands of citizens of Serbia protest against a mining project with potentially disastrous consequences on the environment in western Serbia.

Finally, contrary to all abovementioned reports registering downfall of democracy, the Commission’s 2021 progress report speaks of (limited) progress in democracy in Serbia. It seems that the EC decided to stick to the form while skipping the substance and reduced the enlargement to a “box-ticking exercise”. Unfortunately, EU member states supported this approach.

What can be done now?

First, the policy of “stabilitocracy” where the EU supports local strong men in the WB in exchange for a fragile nondemocratic stability must end, now. Situation in the WB, regarding both democracy and security, was much more stabile 10 years ago than it is today, largely due to EU neglect of EU values in the relations with WB countries. It must be underlined that it is not up to the EU to change governments and impose democracy in the WB. These are internal processes and choices of every country. However, the EU and its member states should not make these processes harder by supporting authoritarianism, either.

Second, we must call things by their proper name. At this moment, Serbia is moving away from fundamental EU values. Serbia today is more similar to Hungary and Russia than to a liberal democracy described in the Article 2 of the EU Treaty. Absurdly, negotiations are moving forward while the candidate country is moving away from core EU values.

The best way for EU to help re-establish democracy in the WB and Serbia is to clean its own act back home, since the EU internal problems are spilling over to the WB.

20 years ago, the EU was the only “game in town”. It had desirable values and generous development funds. Today we have new players in the region offering funds, which are more expensive than EU funding, but are easier to get with no strings attached. This is much more alluring to corrupt elites than conditioned EU funds that require accountability and auditing.

The most important distinction between the EU and the new players are the EU values. Once EU started playing with and negotiating about its own values this distinction got blurred. The result of that is what is happening today in Serbia and the WB.

If the EU wants to be a geopolitical player and promote its own values, as an opposite approach to other world powers from the East, the EU should start acting like a player and promote its own values in practice, in the WB, primarily. The EU cannot be a global player if it cannot solve issues in the WB and promote its values with candidate countries and EU-friendly population. All the instruments for this are there but thus far there was no will to use them. Without this, value-based approach, the EU would lose the main and the most important distinction to other global players.

You can read the interview in Confrontations Europe via the following link: https://confrontations.org/la-revue/revue-133/