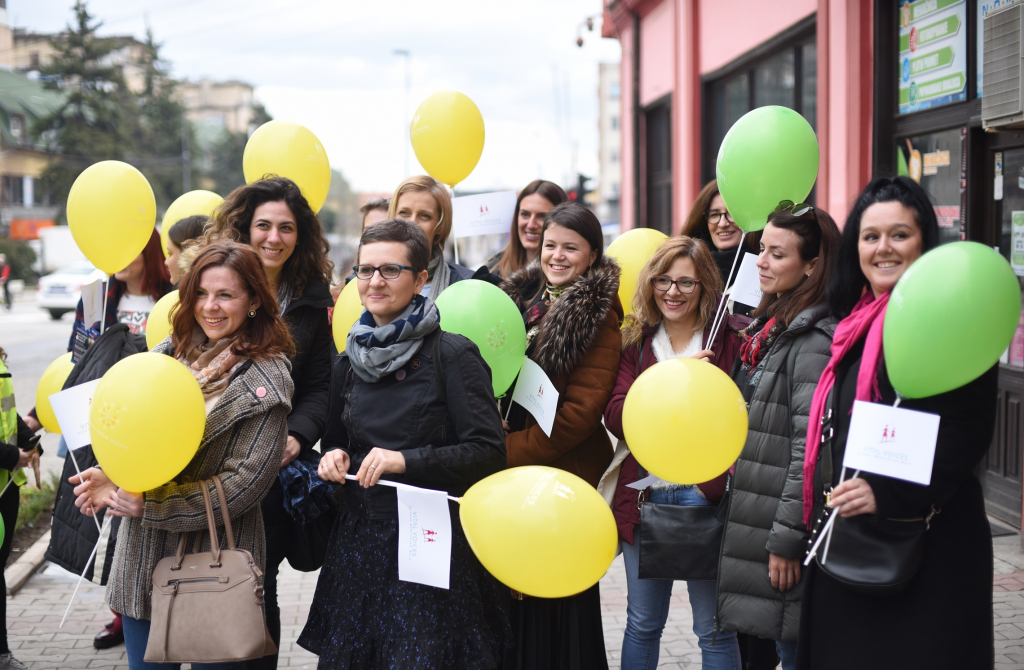 A mentoring walk marking the International Women’s Day – March 8, within the Share Your Knowledge program, was held last Saturday in Zajecar. The aim of the event was to point out the need for greater visibility of women in public life and to promote mentoring and women’s achievements.

After the Walk through the main streets of Zajecar, a public debate was organized on the topic “The role of women in sustainable development”, where Marina Milić, Deputy Mayor of Zaječar, Lidia Vujičić, UN Women Representative and Dunja Marušić, Communications Coordinator of the Timok Youth Center spoke. moderation of the project manager, Zorana Milovanović.

The importance of the topic is reflected in the need to consider not only the position of women in the fight for a more just and sustainable society, but also in the potential that women leaders have in the process. Women make up half of the global population and thus represent a huge potential that must not be overlooked. Also, in addition to the fact that gender equality is highly positioned on the Sustainable Development Agenda, but also within national development strategies, it is important to recognize who are the bearers of these changes and how many women are invited to make decisions within development planning. The conclusion of the debate is precisely that the characteristics and characteristics of women’s leadership are strongly correlated with the values ​​and goals of sustainable development that lead to a fairer, more peaceful, and sustainable world. The potential of women’s leadership is present in all spheres and the role of women is not only important in achieving goal no. 5 Gender equality, but women should also be present and decide on the directions of achieving all 17 goals.

Lidia Vujicic points out that the role of women in sustainable development is discussed, but that there is still a lot of room for greater involvement of women in the adoption of strategies, plans and in the implementation of ideas in order to achieve sustainable development. Progress in the economic empowerment of women in Serbia is present, and a somewhat smaller increase in political participation has been observed. However, the care economy sector remains unknown and inconspicuous, and data on unpaid work are extremely staggering: caring for one household “costs” around € 9 billion a year, and accounts for 27% of gross national income.

“The support of institutions is necessary here, in the development of alternative social services, which would provide women with support and assistance. Every woman must find understanding of the environment in the local community, understanding by the employer, as well as accessibility to the services of local services “, explained Vujičić. She added that it is extremely important that the economy of care, that is. unpaid work of women, the lack of division of labor within the choice of children, household, and the elderly as one of the priorities in development planning, in the field of gender equality, but also in economic development, because this case shows that there is a high correlation between women’s rights and prosperity economic system, and ultimately society as a whole.

Dunja Marušić pointed out that women should not only help, but also participate in the work of institutions, and for that it is necessary to advocate appropriate policies with decision makers. She sees a problem in meeting quotas, because women who are placed in certain positions for that purpose, are sometimes unaware of their leadership skills.

“Another noticeable problem is that women are often not aware of what they can do, while those who are aware do it,” said Marusic, adding that she sees the potential for further empowerment and victory over stereotypes in cooperation with institutions and work. with young people.

“This will enable the existing solutions not to be a form, but to be transformed in the direction of instruments that will really result in the improvement of the position of women in our society,” she concluded.

Marina Milić points out that the city of Zaječar recognized the potential of women and rounded it off by signing the Charter of Noon Equality in 2016. In the city of Zajecar itself, women are in positions of power, starting with themselves, as deputy mayors, and numerous councilors, for example, for finance and agriculture. However, she emphasizes how difficult it is to be a leader in a small community, because the environment often does not trust that a woman is capable of making good proposals, let alone making decisions. Another example of good practice at the local level is that the City Administration has implemented a program of education and empowerment of women in rural areas, knowing that the importance of valuing women’s work must enter the consciousness of men.

Zorana Milovanović pointed out how important it is when communicating what women’s leadership is, to emphasize that the emphasized calmness that helps in making decisions is not the result of decision-making from the position of the “softer sex”, but the absence of violence and conflict from solutions that leaders recognize and propose. It is very toxic to communicate tenderness and sensitivity as traits that are defined as the advantage of women when in the decision-making position, because it is primarily a matter of stereotyping, and then it seems to insist on women’s leadership as leadership suitable for certain areas of business. they remain reserved for men.

In conclusion, let’s say women need to be given equal opportunities to make decisions and participate in leadership positions. It is not enough just to recognize the female role in the sustainable development of local communities, but also to encourage them, create a favorable environment for improving their position and thus enable them to fulfill their potential. The leadership skills of women that we recognize as a comparative advantage are tolerance, negotiation and mediation skills, openness to new experiences and attitudes, team orientation and calmness.

Mentoring walks are organized as part of the action of the Global Women’s Leadership Network and the organization Vital Voices, and the Walk in Zajecar was one of more than 160 Mentoring walks in 66 countries this weekend.