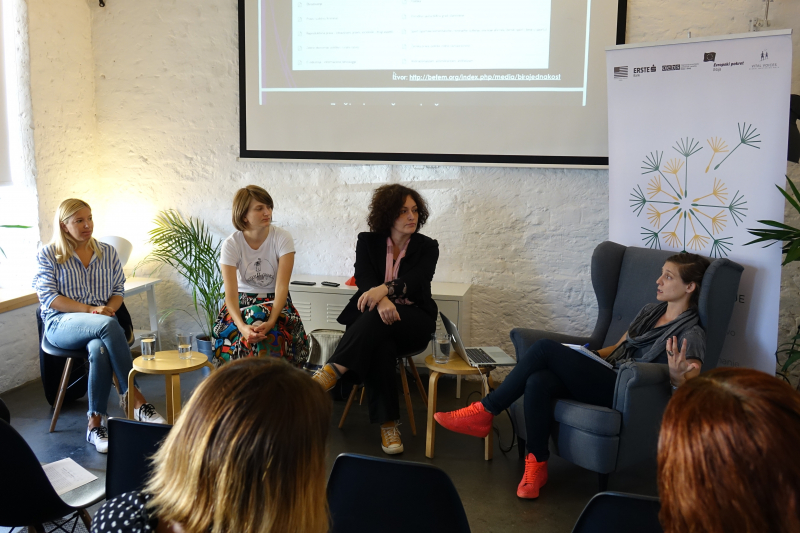 At the Roundtable “Women in the Media” held on September 28 at the StartIt Center Belgrade, within the framework of the mentoring program for women. The mentees and mentors of the Program had the opportunity to meet 3 successful women from different fields of the media sector, who were more than willing to share their experience, knowledge, and stories about the challenges and successes in their developmental path, but also about the position of women in the media sector. The discussion was moderated by Dina Rakin, project manager of the Share Your Knowledge Program and journalist by former education and participants were: Milica Batricevic, a member of the feminist cultural center BeFem, Sandra Pekic, journalist at Tanjug Agency, and Jelena Karakas, editor-in-chief of Buro 24/7.

Although the media, and especially journalism, is increasingly referred to as the “women’s profession”, in terms of the number of women employed in the media sector, gender equality has not been achieved. There are more women who work as journalists, but there are fewer women in high-profile positions, as are few women who report on the news. There are especially few women when reporting in fields such as politics and economics, while the content of the art of art is rife with the presence of women. Our booths addressed this situation, pointing out that the fundamental problem is the lack of a developed woman’s solidarity.

Sandra Pekic emphasized that women, while in lower hierarchies in organizational structure, have a strong sense of female solidarity and provide professional support to each other, while in higher positions, women in the media favor younger male associates and send a message to women that they go through all that they originally went through alone. Milica Batricevic added that the issue of women’s awareness of gender roles and patriarchy as a stumbling block is always an obstacle to the development of women’s solidarity and that everything must be done first, on an individual level, to explain to each woman why she has to fight more in her career. across all sectors, including the media. Jelena Karakas took an optimistic stand, pointing out that while Serbia is a few percentage points worse than the world in terms of gender equality in the media, it is still in its infancy with a global trend of gender-sensitive reporting, but also of breaking the link between entertainment content and women and that space is increasingly being given to reporting on women’s emancipation and the contemporary lifestyle of women away from the patriarchal image.

Participants in the discussion addressed the issues of gender-sensitive reporting and the issues that sensationalism in the media raises when creating women’s perceptions in society. Scandalous headlines that sexually objectify women create an atmosphere of, if not affirmative, at least a non-judgmental stance on sexual harassment or violence against women.

Milica Batričević emphasized that the overall media discourse of deep social divisions also leads to sharply opposed views on gender equality – from right-wing patriarchal views aimed at limiting the development of women’s consciousness and moving away from the understanding of women as objects of reproduction to left-wing modern understandings about women being equal to men in both rights and obligations. Too much media space is being given to individuals who are still propagating the patriarchal value system and putting women in the forefront, in a way that stimulates endangering women’s rights by sending the message that it is only “natural” and “normal” for the whole society, and above all the family. Sandra Pekic added that sensationalism is also the result of commercialization of the media and that the race for as many click-throughs as possible leads to the need to headline the news in the least nebulous, sometimes bizarre, and unfortunately the core of the news. reporting on domestic violence against women. Jelena Karakash referred to the need for people to read sensationalist news, as a result of an underdeveloped awareness of how the media affects them and vice versa, adding that she believed that the following generations, primarily the y-generation, would not be a suitable reader structure such news and that these generations require news of an informative nature and are able to value the content of news.

The participants also commented on their motives for dealing with the media, the experiences they had on their career paths in the sector, the differences between traditional and digital media regarding the position of women, what needs to be done to keep women in the media, but also improve the whole society. As in the beginning and at the end, the greatest emphasis is placed on developing women’s solidarity and eliminating women’s fears that feminism is something that will make them an object of attack, but more powerful women who know why and how they fight for their rights.

By premins| 2020-01-14T17:31:05+00:00 September 29th, 2019|Categories: EMinS News|Tags: Mentoring, Share Your Knowledge, Women Empowerment|Comments Off on WOMAN SOLIDARITY IS THE KEY TO IMPROVE THE POSITION AND IMAGE OF WOMEN IN MEDIA